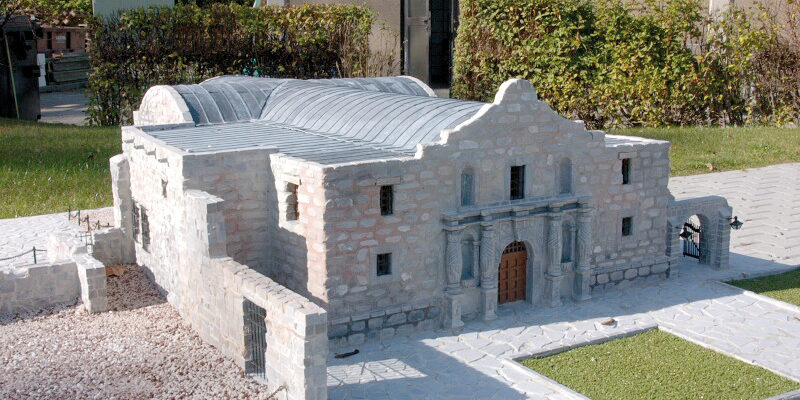 On 1st May 1718, the San Antonio de Valero Mission was founded as the first in a chain of missions established near the San Antonio River. However, the construction of the church only started in 1744. It had two tasks: converting the local Native Americans and extending the Spanish borders. In 1793, the mission was abandoned and the estates were divided among the Indian inhabitants. From 1793 on, the mission building was used by a company of Spanish soldiers from Álamo de Parras (Mexico). It is believed that the name “Álamo” derives from this. During the Mexican War of Independence (1815-1821), the Mexicans seized the fortress. In 1835, Texas declared its independence from Mexico resulting in battles all over Texas. The Alamo became famous due to the battle of the Alamo in 1836 in the course of which 189 Texans resisted 4,000 Mexican soldiers for 13 days. They were hoping for relief troops sent by General Houston (the capital of Texas is named after him). However, Antike 700 900 1200 1400 1600 1800 1900 1920 1950 1970 he did not dare to take up the Mexican superiority under the command of General Santa Ana. Upon capture, all of the Texan defenders were killed. Several films of the history of the battle were made, among others, a film with John Wayne in 1960. Today the building is managed by the society “Daughters of the Republic of Texas“ which was founded in 1891 aimed at keeping the memories of the Texan pioneer families and soldiers alive. Every year about 2.5 million people visit this historical place which is not only of cultural-historic interest as a typical mission station from the time of the conquest of the West but de facto is one of the most important national shrines of the USA due to its history and myth.