The Temple of Sagrada Familia, Barcelona 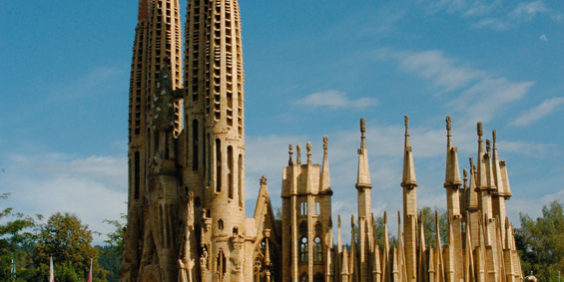 In 1883, Antoni Gaudí accepted a commission to build a “church of the poor” on what was then the outskirts of Barcelona and planned on completing it by 1910. To this day it is still a building site where work has been carried out on and off for over a century. As the building was financed solely by donations, work did not progress very rapidly. In addition, Gaudí frequently changed his plans as he went along. On 7 June 1926 he was knocked over by a tram and died 3 days later at the age of 74. His pupil, Sugrañes, continued the work. Between 1954 and 1976 the west front and its four towers were completed, portraying the passion and death of Christ. Originally 12 towers were envisaged, four on each side. Gaudí himself managed to complete the east front showing the birth of Christ. The 18 towers (eight of them completed) are between 90 and 112 m high. 12 towers symbolise the apostles. It is planned to continue building on the Minimundus model in future.