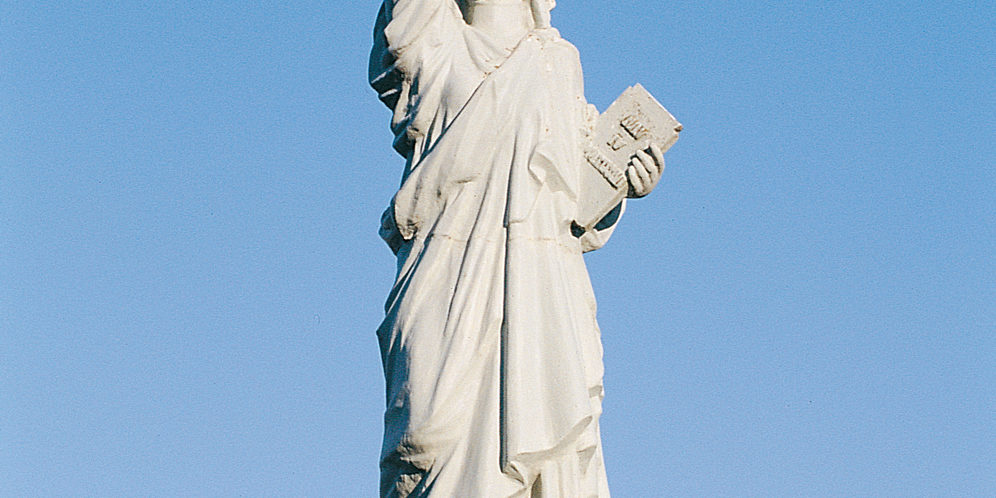 The statue was unveiled to the accompaniment of 500 thundering cannons, pealing bells and tumultuous applause in 1886. It was given by France to the United States to commemorate the centennial of US independence and symbolised freedom and democracy. In addition, the mighty statue embodied the Americans’ self-image as custodians of the laws of human freedom throughout the world. The sculpture was created by the artist Frédéric Auguste Bartholdi and its iron skeleton was provided by Gustave Eiffel, the constructor of the Eiffel Tower. From the small, rocky island in the harbour of New York where it stands, the statue has greeted all ships entering the port for 128 years now. The ravages of time have made it necessary to carry out extensive restoration work, with resourceful vendors buying up the resulting scrap iron and debris to turn parts of it, such as rusty rivets and nails, into souvenirs which can be resold at a high price. After the attacks of 9/11 the Statue of Liberty was closed to the public. 2004 part of it was reopened and since 2009 it is possible to visit the crown again. It’s 354 steps up to the crown and it is like climbing the stairs of a 22 story building. The Statue of Liberty is 46 m high and its pedestal measures 47 m.